The anterior cruciate ligament is one of the main stabilizers of the knee for sport. It is lodged in the central pivot of the knee and avoids, when it is tensed and intact, the anterior translation of the tibia with respect to the femur.

Etiology of the rupture of the ACL:

It is an injury that occurs with a sudden turn of the knee or sometimes also after a gesture of hyperextension. When it breaks, there is usually a significant effusion inside the knee that is due to bleeding that causes when detaching.

Currently, the most widespread practice is the taking of the autologous tendons of the knee through a small incision in the anterior part of the knee. These grafts from the patient themselves are prepared (plasty) to replace the damaged ACL.

Next, bone tunnels are made in the femur and tibia of the plasty´s diameter and the new ligament is fixed in the ideal place for the correct functioning of the knee.

The following image shows a broken and unstressed anterior cruciate ligament. We proceed to its small debridement to replace it with a new tense and effective ligamentoplasty.

The following image shows the anterior cruciate ligamentoplasty in its correctposition, once the ACL is reconstructed. 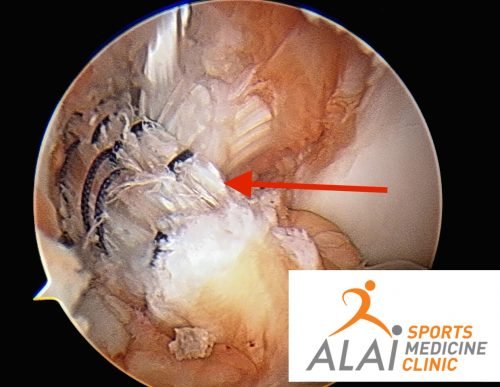 You can see the complete operation on this link: